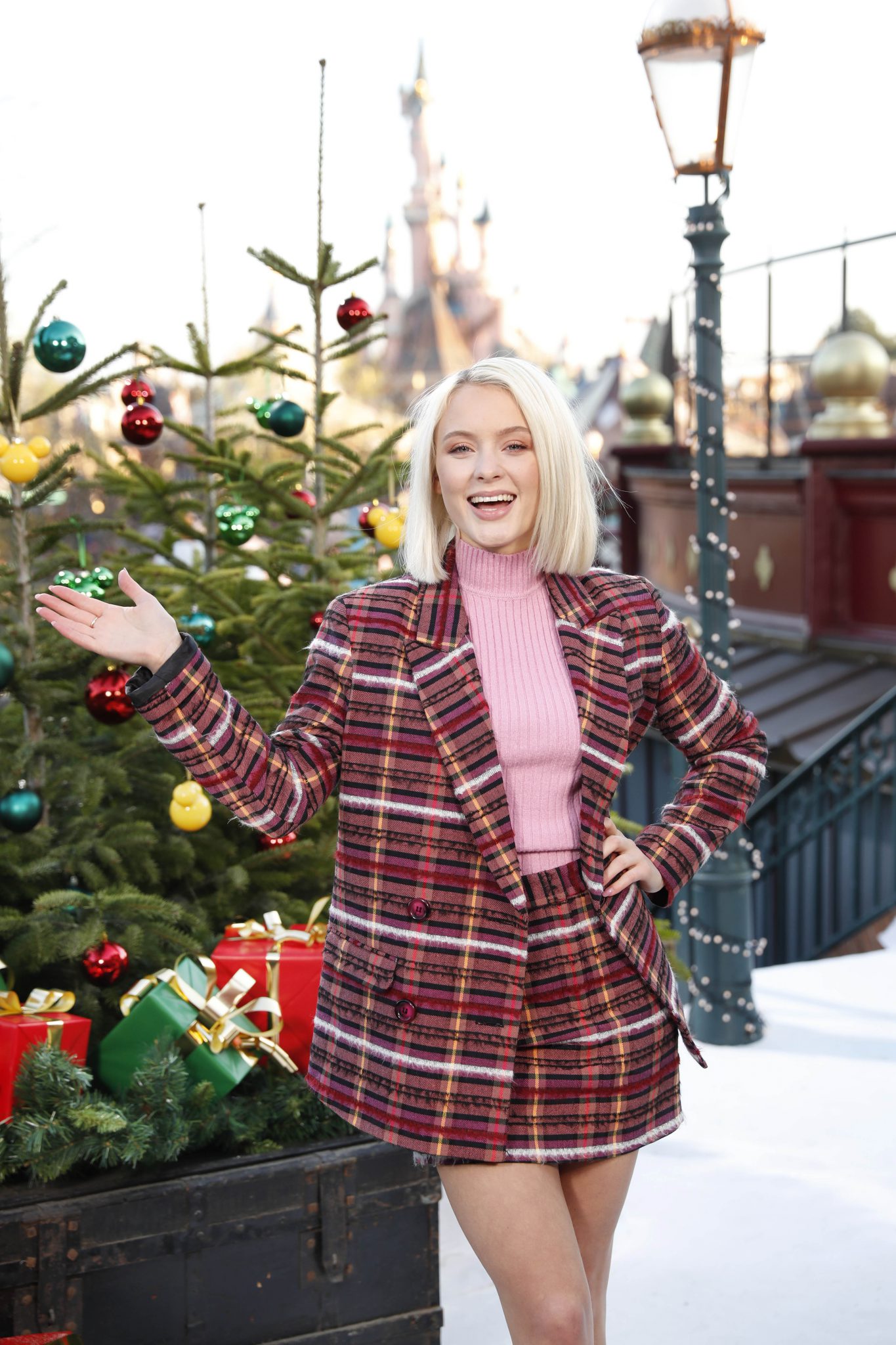 During the fun-packed weekend –  which also included a very special sing-along surprise for Mickey Mouse on his 90thanniversary –  the stars experienced the incredible line-up of festive activities that are taking place at the park from now until 06 January 2019. Please see full details of the Enchanted Christmas Season at Disneyland Paris in notes to editors below.

Abbey Clancy and her husband, Stoke and Ex-England footballer Peter Crouch, enjoyed the weekend with their three children Sophia Ruby, Liberty Rose and Johnny. Abbey spoke about her kids having the best tm ever. She said: “It’s been absolutely lovely. The kids have loved it and it’s just been a really magical weekend. A fantastic time.”

Made in Chelsea favourite Binky Felstead brought along her daughter India to soak up the Christmas magicat Disneyland Pariswhere she enjoyed meeting the characters including Minnie Mouse and Daisy Duck,saying “I’m just in the best mood ever. I think it’s incredible, they’ve done it so well and all the characters are dressed up, all the dancers, all Christmas music playing the whole time, it’s been amazing. Really, really gets you in the [Christmas] spirit.”

Coronation Street actress Helen Flanagan and Celtic football player Scott Sinclair, who got engaged together at Disneyland Paris six months ago, said that it brought back nice memories to be back in the park. Helen said: “That was really nice memories, but I remember when I was last here I was 9 months pregnant, I literally could hardly walk around the park and my feet were literally massive. So at least now this time I feel, at least I can walk around the park and I don’t feel so big. But for us, it is really nice memories.”

Georgia and Danny Jones experienced snow for the first time this year on Main Street, U.S.A. and commented that it got them into  festive mood. Danny said: “It’s amazing. Do you know what, it’s got us in the spirit. We were walking down to the castle this morning and there were and they were playing some Christmas songs and it was very special. And it’s very Christmassy, got us right in the mood ” Georgia added: “It did! It’s so festive and it’s just made us really excited for Christmas”

Rounding off a memorable weekend, Swedish singer-songwriter Zara Larsson gave Mickey Mouse the treat of his life by performing a pitch-perfect version of ‘Happy Birthday’ to him.  The Lush Life hitmaker who is currently riding high in the Official UK Singles Chart with Ruin My Life, described the experience of singing to Mickey as “fantastic”.

Zara said: “I am so excited to be here at Disneyland Paris, because I’ve never been and I think this place in itself is magical. And to be a part of Mickey’s 90thbirthday feels fantastic. Like many kids growing up, even my parents or probably even my Grandma, he’s been a part of my childhood so now I can be part of his special night and that feels great.”

What’s on at Enchanted Christmas Season at Disneyland Paris

The moment you set foot in Disneyland Park it starts to feel a lot like Christmas, with the giant Christmas tree and snow falling every day… as if by magic…

This Christmas season you’ll be able to enjoy all the excitement of the Disney Christmas Parade not just once but twice daily. It’s making a big comeback, spreading the magic of winter across Disneyland Park – and it’s even making snow fall on Main Street, U.S.A. Mickey and Minnie Mouse, Donald Duck and Goofy will be leading the dance – in fact they’re already getting ready to celebrate Christmas in the best possible way, along with all their friends. Woody and Buzz Lightyear from Disney•Pixar’s Toy Story will be joining in the fun, too. Dancing gingerbread men, candy canes and all sorts of other Christmas treats will also be twirling around this magical winter wonderland, plus we’ve heard that Tinkerbell and even Santa himself are going to be there!

Guests will get the chance to meet Marie from the Aristocats, Scrooge McDuck, Peter Pan and Miss Bunny, to name but a few.  It goes without saying that where there’s Christmas, there’s Santa and he’s decided to take up residence in Fantasyland again. To meet him, just head for “Meet Mickey Mouse”, every day up to and including the 25 December. Just like Mickey, Santa will have his own lodge where he’ll give you the warmest welcome. It’s a magical meeting you’ll treasure forever.

Light up the tree with “Mickey’s Magical Christmas Light”

There’s nothing quite like the moment the Christmas tree lights are switched on at Disneyland Park. And it’s not just any old tree – this one is 24 metres tall and will be switched on by magic at an event attended by Mickey, Minnie and Santa himself! With a festive countdown, enchanting Christmas lights, snow and Disney magic, everything is set to ensure you are immersed in the wonder of Christmas. What’s more, it’s also a chance for us to celebrate Mickey’s anniversary, with new decorations and a new musical interlude especially for him.

From 16 November, Stitch is going to be taking over the Royal Castle Stage – so Christmas is sure to be a blast! He’s going to do all he can to make sure you have lots of fun with Mickey and Minnie, Donald, Daisy and Goofy, with some of our greatest Christmas classics for a backdrop.

A completely new attraction will be available in Europe for the first time ever, from 1 October, 2018. It’s called “Mickey’s PhilharMagic”. Get ready to try a new 4D experience at Discoveryland Theatre. Once you’re sitting comfortably, you’ll be able to see Mickey Mouse and Donald Duck on the big screen. They’ll take you right to the heart of some of the great Disney classics, such as Aladdin, The Little Mermaid and The Lion King – complete with some new twists caused by that mischievous Donald Duck. It’s a unique opportunity to enjoy the sound of some of Disney’s greatest melodies and celebrate 90 years of Mickey Mouse fun in the best possible way.

For those who like Christmas songs, a visit to the Videopolis Theatre in Discoveryland is a must-do, to check out new show “Christmas Songtime!”. Every day, guests will get a chance to go on stage and take part in the action, alongside Mickey, Minnie, Goofy and Disney’s professional singers. What a great way to celebrate the “Disney Performing Arts” programme.

Every morning, guests will be able to awaken to the magic of Christmas at the foot of Sleeping Beauty Castle with a larger than life advent calendar; discover a new surprise every day, with Mickey, Minnie or Goofy.

For the second year running, Walt Disney Studios Park is celebrating Christmas too, with even more fun for all the family!

Following its first sensational season, “Mickey’s Big Band Christmas” will be setting up at Animagique Theatre at Walt Disney Studios Park. This live show is the perfect combination of a traditional musical and typical Disney. A jazz band, alongside energetic tap-dance numbers… Every day this show pays lively homage to winter’s loveliest melodies, inviting you to get into the Christmas spirit with the Big Band, singers, dancers and of course Disney Characters. An absolute must-see: Mickey’s drum solo! Whilst Minnie is dreaming of being a jazz diva.

New show: A surprise for Mickey!

It’s time to celebrate 90 years of fun with Mickey Mouse with an interactive show taking place several times a day. Will Minnie be ready on time or will she have to ask her friends – or even the audience – to help her give Mickey an unforgettable surprise? This very special birthday surprise is going online too, because guests will be invited to share a special message for Mickey Mouse on their social media beforehand, using the hashtag #SurpriseMickey. Their message might even appear during the show as an extra surprise for Mickey. What better way of making this a truly memorable anniversary celebration?

Bring your day at Disneyland Paris to an amazing close with Goofy’s Incredible Christmas. This immersive night-time show uses mapping technology and breath-taking special effects on the walls of a fan-favourite attraction – The Twilight Zone Tower of Terror™. Mickey and Minnie Mouse, along with their friends Goofy, Donald Duck and Daisy, will be at your side throughout this fantastical journey. Carried along by the festive spirit, they’ll take you on a flight over spectacular landscapes, from the North Pole to the most amazing party you could ever imagine. Watch out for some unexpected surprises – it is Goofy we’re talking about, after all! As well as this incredible programme, you can also meet all sorts of Disney characters at Walt Disney Studios Park, such as Goofy, in his Santa Claus outfit, Minnie Mouse or Buzz Lightyear.

Enjoy a Mickey Mouse Christmas and join him to celebrate his amazing 90th anniversary, from now until to 06 January 2019.