The Right Stuff launches on Disney+ 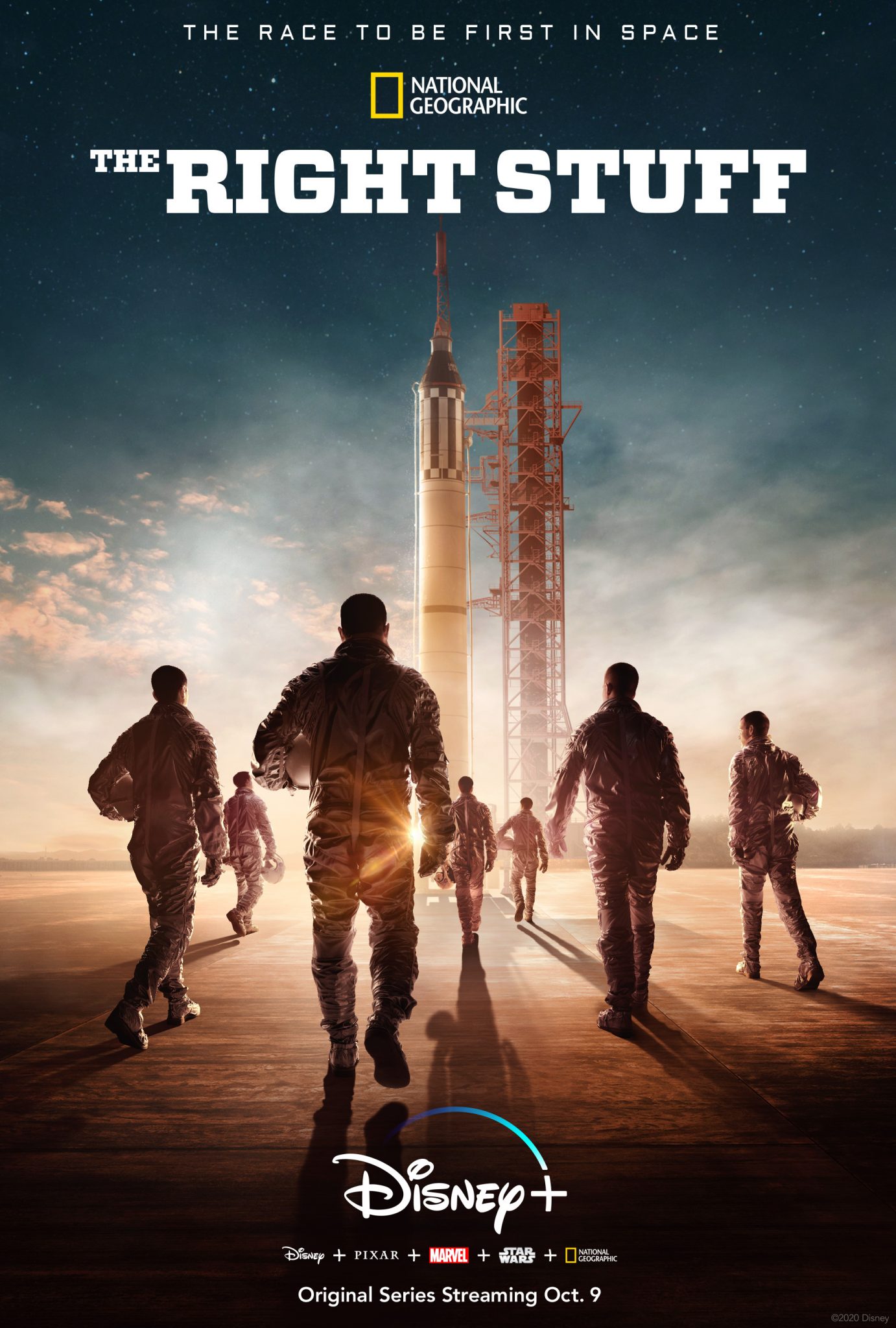 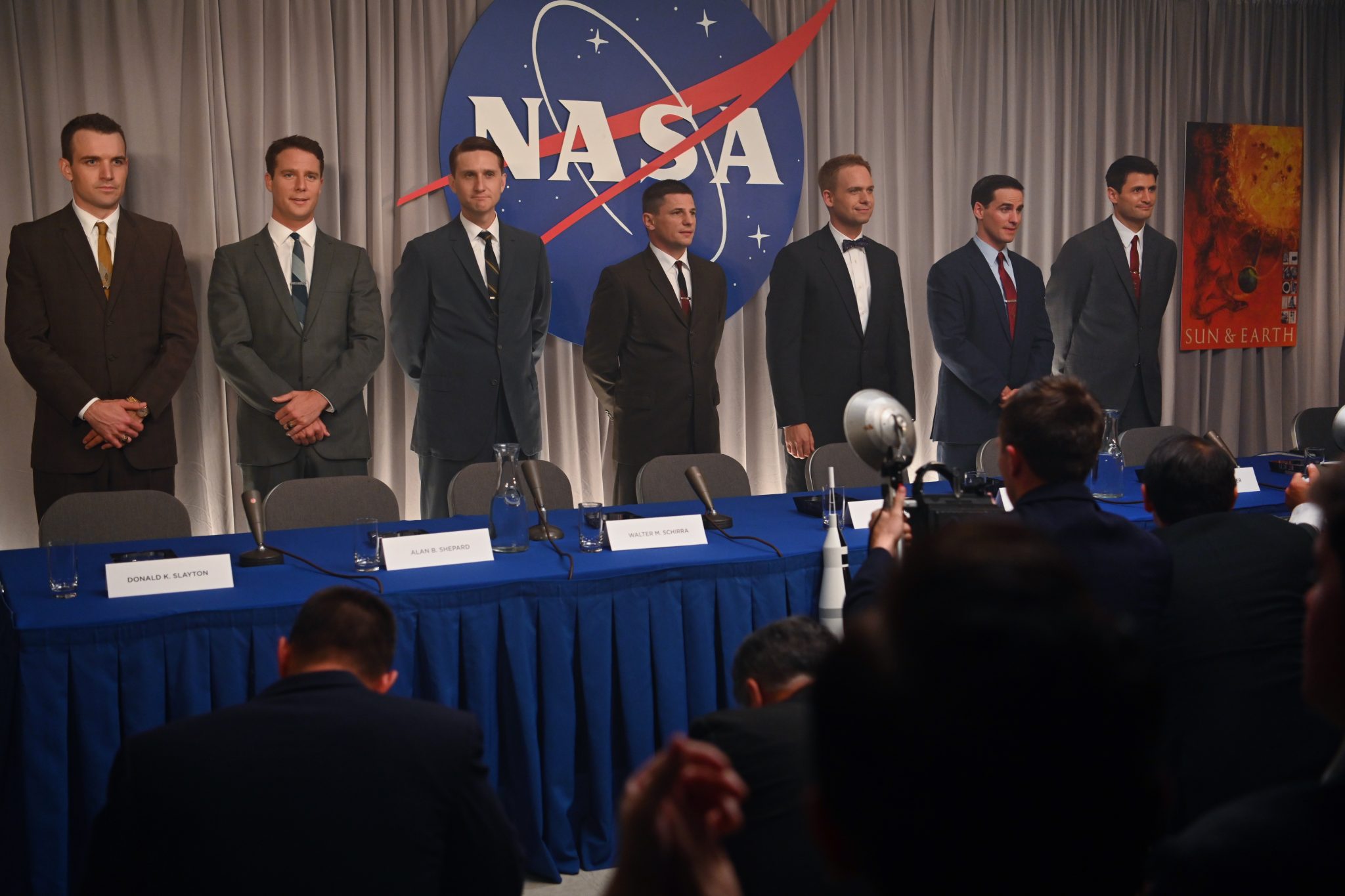 3…2…1…BLAST OFF!  “THE RIGHT STUFF” FROM NATIONAL GEOGRAPHIC LANDS ON DISNEY+ WITH TWO-EPISODE PREMIERE ON OCTOBER 9

The incredible story of America’s first astronauts begins right here on Earth in the Disney+ original series “The Right Stuff,” with a two-episode premiere on Friday, October 9th. Based on the bestselling book by Tom Wolfe, the eight-episode season is an inspirational look at the early days of the U.S. Space Program and the iconic story of America’s first astronauts, the Mercury 7. Produced for National Geographic by Leonardo DiCaprio’s Appian Way and Warner Bros. Television, “The Right Stuff” takes a clear-eyed look at America’s first “reality show,” when ambitious astronauts and their families became instant celebrities in a competition of money, fame and immortality.

At the height of the Cold War in 1959, America fears it is a nation in decline as the Soviet Union dominates the space race. But, the U.S. government has a solution – put a man in space. Newly-formed NASA is given the monumental task, and a group of the nation’s best engineers estimate they’ll need decades to accomplish the feat…but they only have two years.

NASA engineers, including rocket scientist Bob Gilruth (Patrick Fischler) and the passionate Chris Kraft (Eric Ladin), work against the clock under mounting pressure from Washington. Together, they hand select seven astronauts from a pool of military test pilots. These are ordinary men, plucked from obscurity, and within days of being presented to the world, they are forged into heroes before they achieve a single heroic act.

The two men at the center of it all are Major John Glenn (Patrick J. Adams), a revered Marine test pilot and committed family man, and Lieutenant Commander Alan Shepard (Jake McDorman), one of the best test pilots in Navy history. Other members of the Mercury 7 include Captain Gordo Cooper (Colin O’Donoghue), the youngest of the seven selected to everyone’s surprise; Wally Schirra (Aaron Staton), a competitive pilot with a gift for pulling pranks; Scott Carpenter (James Lafferty), dubbed “The Poet” by the other astronauts; Deke Slayton, (Micah Stock), a taciturn but incredibly intelligent pilot and engineer; and Gus Grissom, (Michael Trotter), a decorated military veteran who eventually becomes the second man in space.

The series also examines the astronauts’ families, including Annie Glenn (Nora Zehetner), who contends with a speech impairment in the public eye; Louise Shepard (Shannon Lucio), a wife and mother who refuses to let Alan’s transgressions affect her home; and Trudy Cooper (Eloise Mumford), an accomplished pilot who puts her own ambitions aside to present the image of a happy family.

Set during a time when many wondered whether America’s glory days were behind it, “The Right Stuff” is an aspirational story about ambition and exploration and how ordinary human beings can achieve the extraordinary.

Disney+ is the dedicated streaming home for movies and shows from Disney, Pixar, Marvel, Star Wars, National Geographic, and more. As part of Disney’s Direct-to-Consumer and International (DTCI) segment, Disney+ is available on most internet-connected devices and offers commercial-free programming with a variety of original feature-length films, documentaries, live-action and animated series and short-form content. Alongside unprecedented access to Disney’s incredible library of film and television entertainment, the service is also the exclusive streaming home for the latest releases from The Walt Disney Studios. Visit DisneyPlus.com to subscribe and/or learn more about the service.

Appian Way Productions is a Los Angeles-based film and television production company founded by Leonardo DiCaprio. Jennifer Davisson serves as president of production. Since its launch, Appian Way has released a diverse slate of films, including Alejandro Iñárritu’s three-time Academy Award® and Golden Globe® winner The Revenant, Martin Scorsese’s Academy Award®– and Golden Globe®– nominated The Wolf of Wall Street and Academy Award®-nominated and Golden Globe®-winning The Aviator, along with Shutter Island, Scott Cooper’s Out of the Furnace, George Clooney’s Golden Globe®-nominated The Ides of March, the psychological thriller Orphan and the film adaptation of Dennis Lehane’s critically acclaimed novel Live by Night with Ben Affleck, among others. Currently in post-production on The Right Stuff based on the acclaimed Tom Wolfe book for National Geographic.

The company has put forth strong efforts to gain headway in the documentary world, especially as it pertains to progressive environmental change. Appian Way recently worked in partnership with the History Channel on “Frontiersman,” and National Geographic to produce “Before the Flood,” a documentary film that sheds light on that aforementioned change. It also worked with Netflix on the Academy Award®-nominated Virunga, directed by Orlando von Einsiedel, and Kip Anderson’s Cowspiracy: The Sustainability Secret.  Appian is in partnership with Netflix on several additional documentaries, including critically acclaimed The Ivory Game, How to Change the World and Catching the Sun. Recently released projects included; Sea of Shadows with National Geographic which won the Audience Award at the Sundance Film Festival, Ice on Fire with HBO along with And We Go Green which premiered at the Toronto Film Festival.

One of the entertainment industry’s most-respected providers of original primetime programming since its founding in 1955, Warner Bros. Television produces original scripted drama and comedy series for multiple platforms. As of August 2020, Warner Bros. Television is producing more than 70 scripted series for on-demand/streaming services, premium/pay and basic cable channels, and the five broadcast networks.